In the morning as we were passing through Urabamba the whole village was crowded with vendors bringing their produce including vegetables, animals and flowers… they’re big on flowers especially gladiolus.

Grass for sale for guinea pigs

Early morning setting up at market in Urabamba

Couple of notes… no screens on the windows, no bugs and this is rainy season.

On the way someone asked if there is ever flooding so 2010 Roger told us about picking up 80 travelers from a Carnival ship ….they had 3 days only which to see Machu Picchu…..insisting they must go. It must have been really raining for some time cuz on the way up on the train the raging Urubamba River was up to the tracks in places (it was flooding when we went up too but…). When they were finished up at MP they found out the river had washed out the tracks and that they had to stay in Aguascalientes, which they did for 6 days. They ended up being helicoptered out. 3 other people plus guides had decided to walk out but unfortunately were killed in a rock/mud slides. Thank goodness it hadn’t been raining that badly but it definitely was flooding. No white water rafting …… for anybody including experienced rafters.

There she is … the domed Machu Picchu Train

If you hike the Inka Trail to MP it takes 4 days and the max height is 14,280′. We saw people starting across the suspension bridge and up the trail. Not for me. I’m having a lot of difficulty with the the altitude (and the motion of this bus but has nothing to do with climbing).

Linda, Marilyn, me and Jeanette on the train

As we get closer the vegetation changes to more jungle (liana vines eand bromeliads) like along with the birds…… toucans, hummingbirds, mutt-mutts, tanagers, etc.

Inca trail is 3700 miles long covering from southern Colombia to northern Chile and from Argentina including all of Bolivia, to Pacific Ocean. 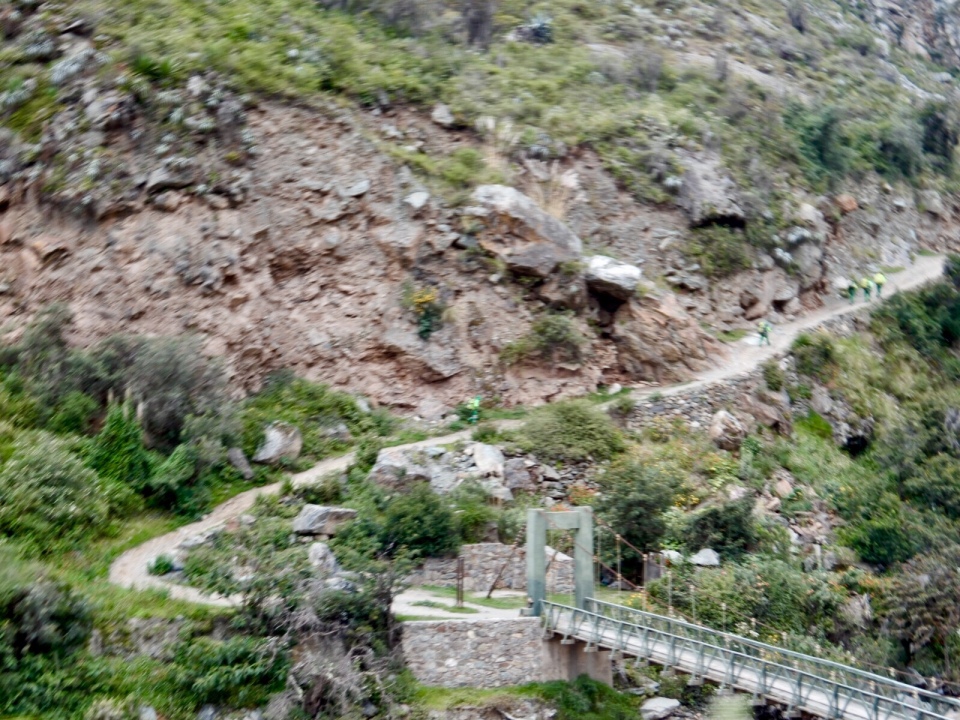 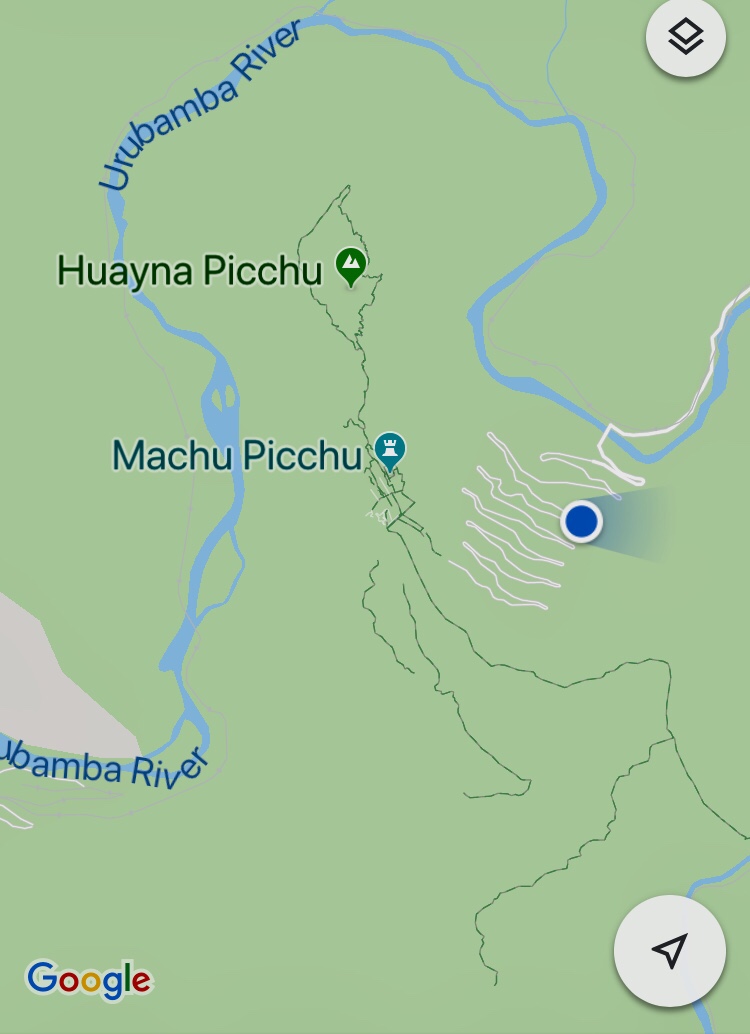 These mountains are spectacular…… mostly straight up and down….. sheer! Wow!

After train we take a bus up series switch backs….. 13 turns believe it or not!!!

We are at 7500’…., down considerable from last night at 9500′ but it’s foggy. Be are in the clouds….. waiting for them to lift so that we can see the amazing Machu Picchu. It lifts but then the clouds cover again, then clear, back and forth. Finally…… Oh My God!!! Spectacular !

That’s the way we come back up…. steep huh? 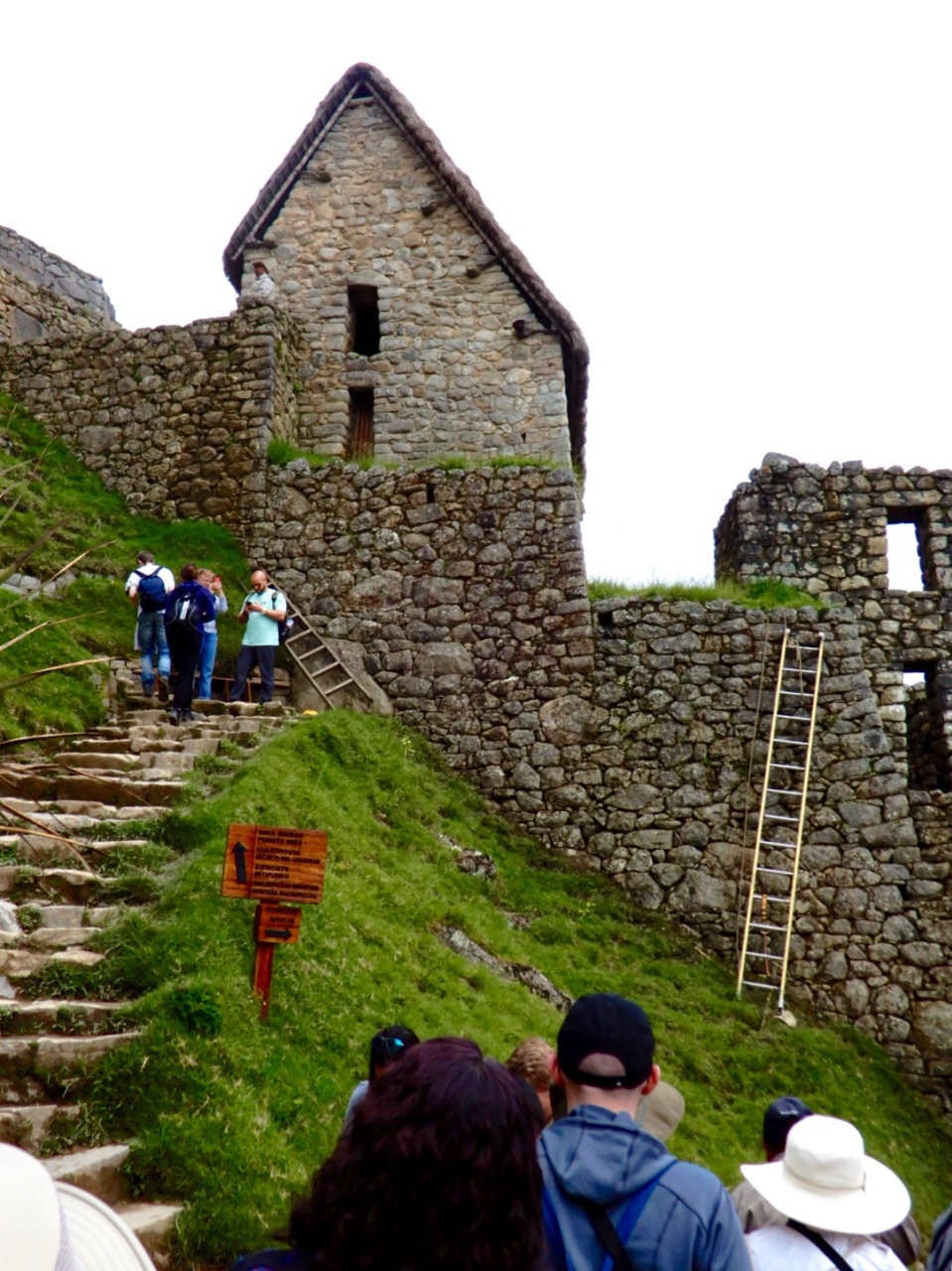 Marilyn and I at the top 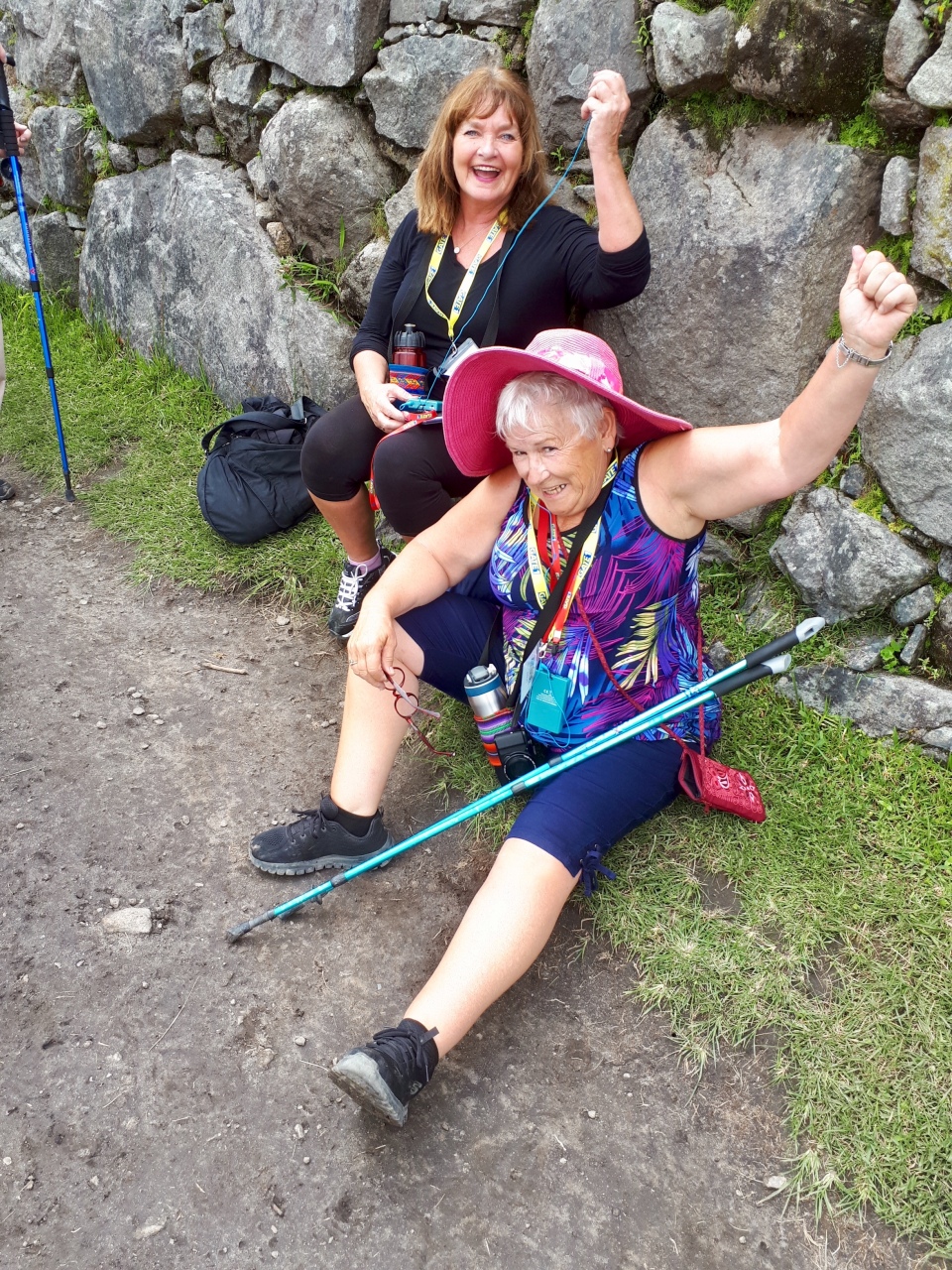 Ugly picture of me but heh…. we made it! 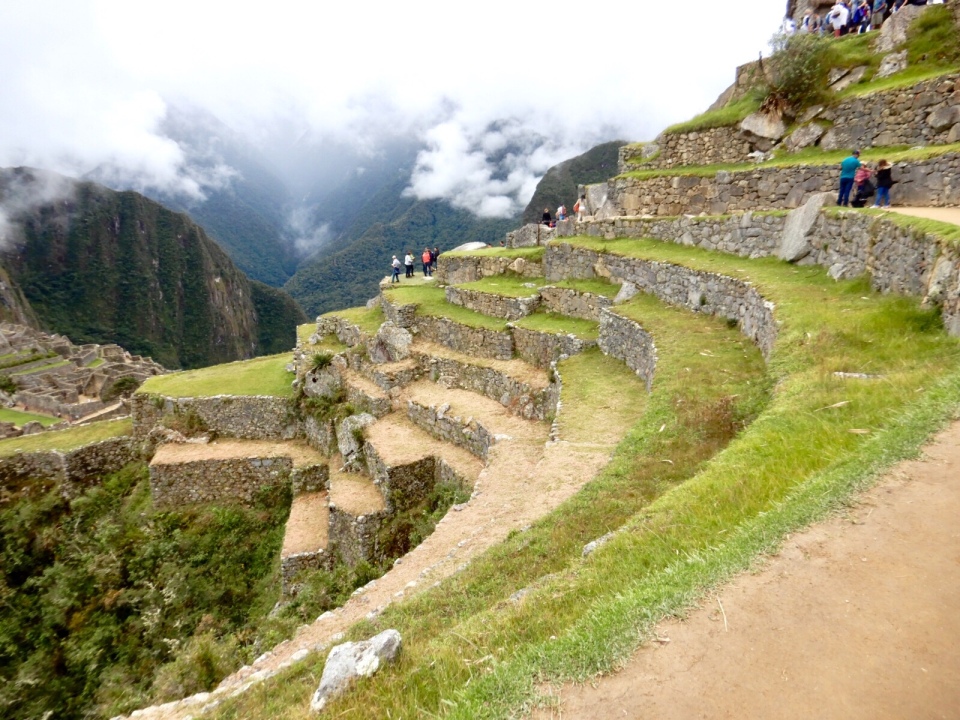 Me on the same ledge 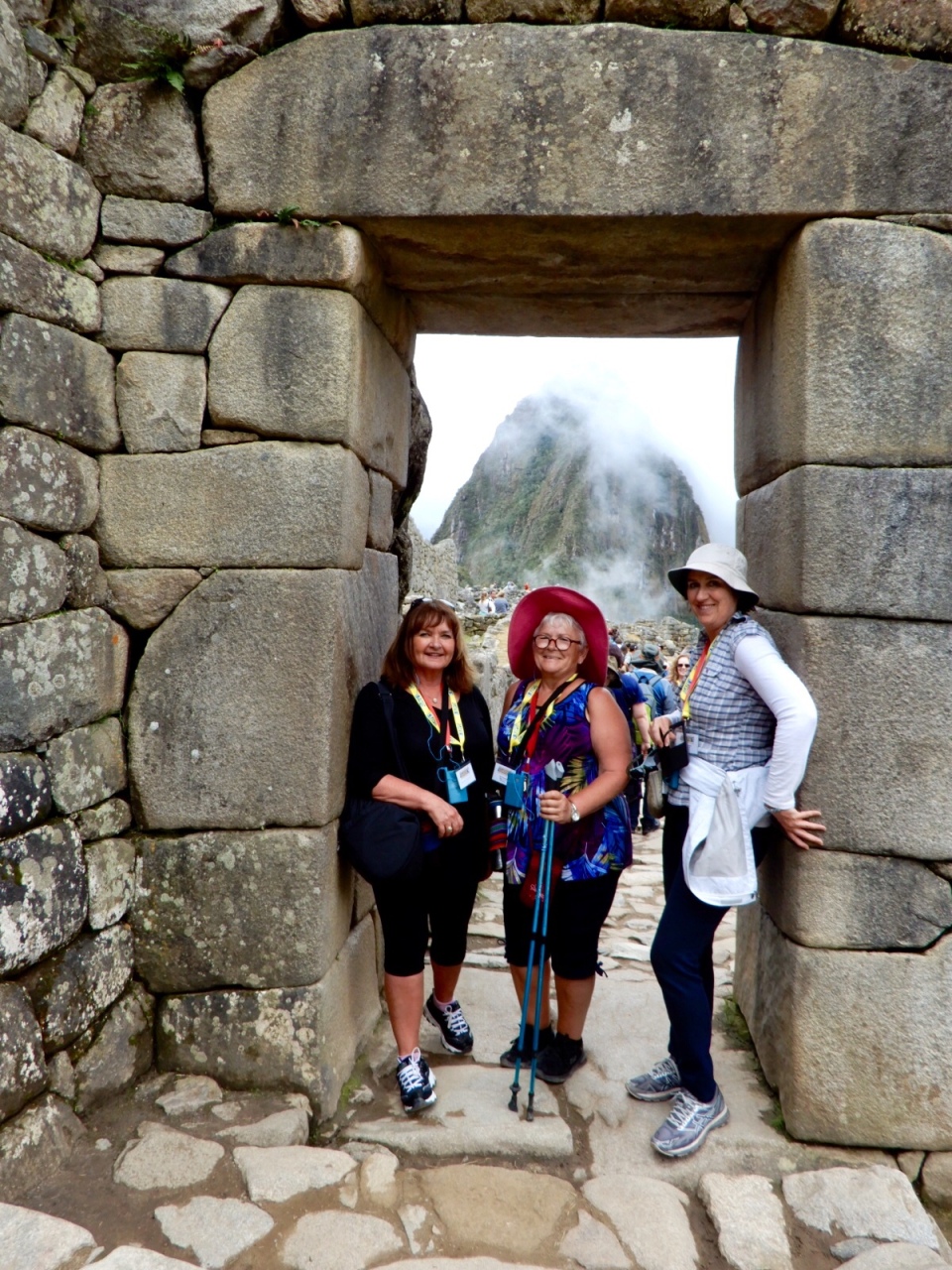 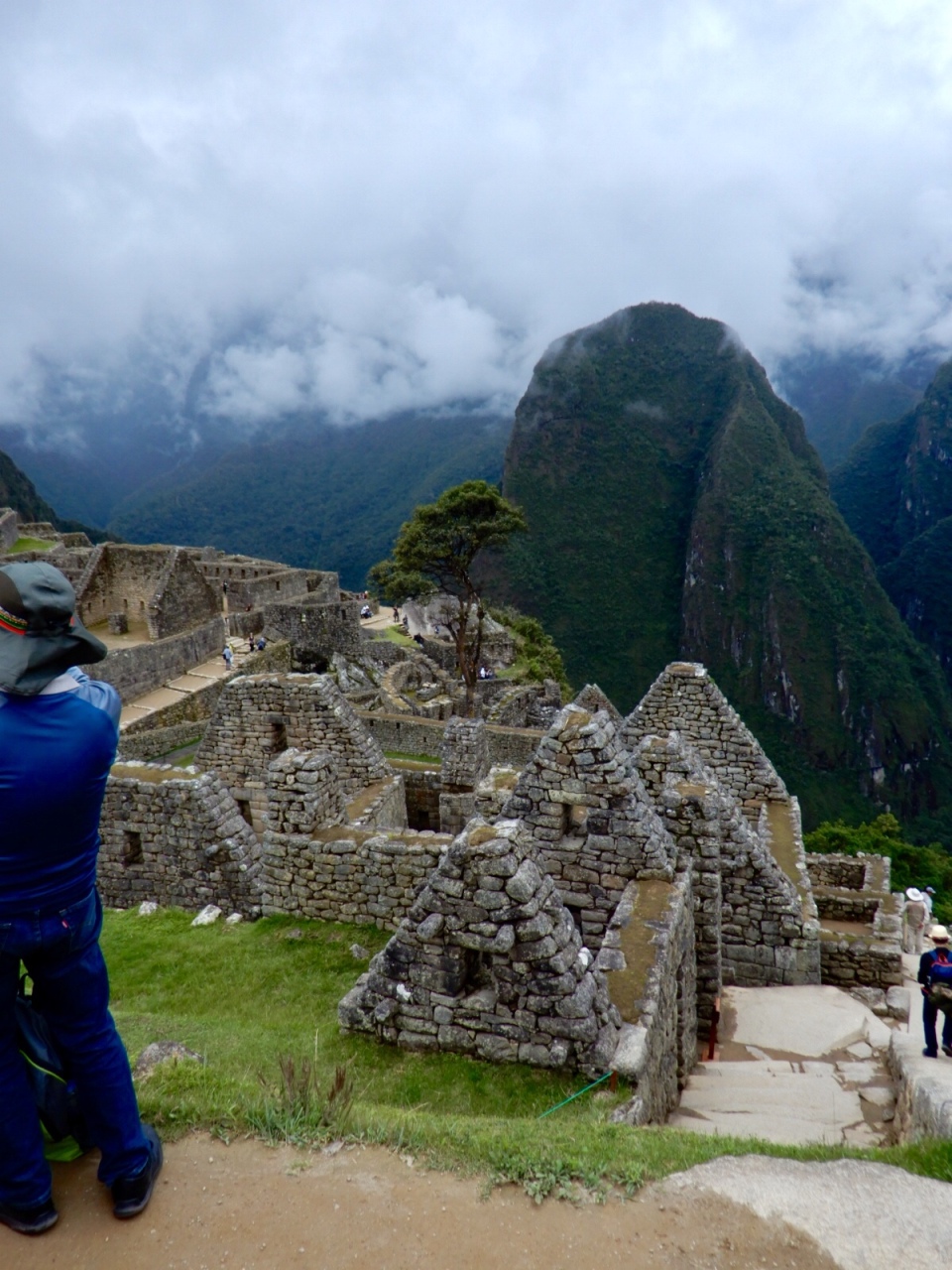 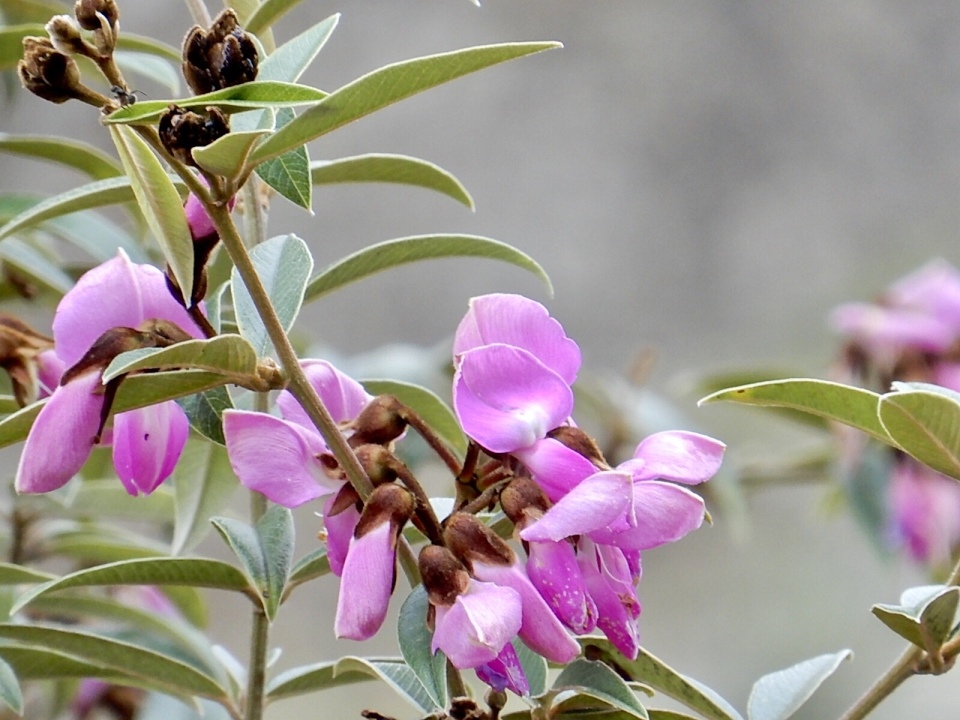 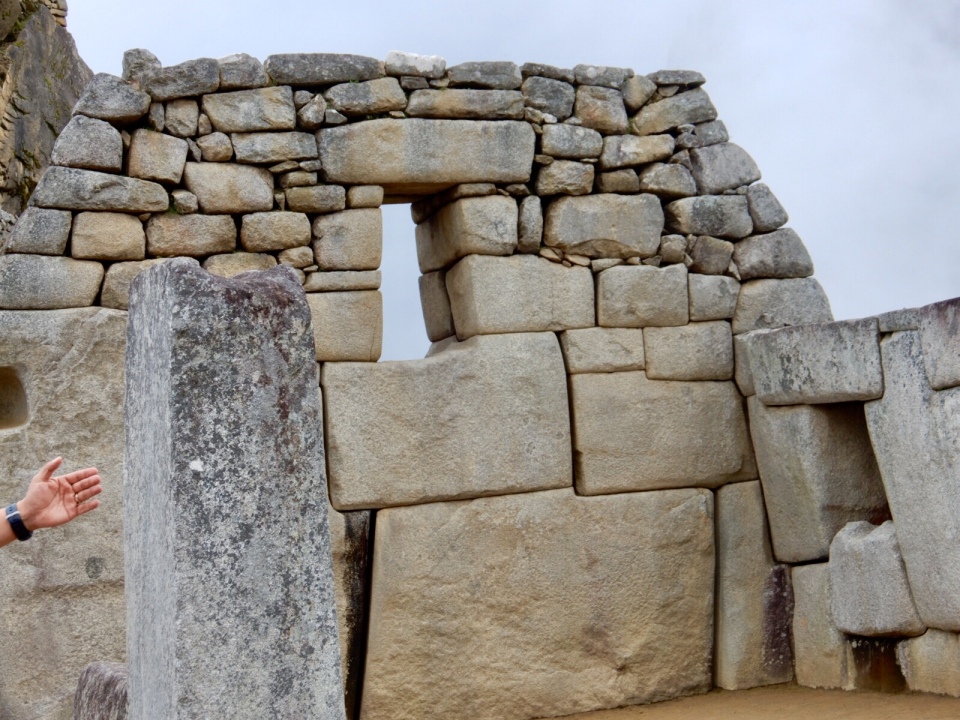 Just look at the drop

The Incas grew coca on these terrraces

The Inca were astronomers and this place was perfect for seeing the heavens. It also is the centre of the Incan empire. It was an important religious place. The population was only 500 but was for high class and priests only. Inca mean king of which there were 14. The lower classes were called Quechuas.

They get 164 ” rain Dec to April… walks never collapsed because of construction.

Jeanette, Linda and assistant Pepito Jose took a different a little easier way. On the way I think it was Jeanette, spotted a viper sticking out of the rocks so Pepito tells Linda to move to the other side of the walk. In doing so she didn’t notice a puddle but fell in it. She never did see the snake.