Up at 4:15 this am for flight to Cuzco at 8:15. It was a 1 hour flight on Latam airlines (takes 23 hours by bus). Amazingly enough, passengers can carry on water on domestic flights believe it or not. The check-in was extremely fast but our guide had printed off luggage tags, boarding passes. New plane, big clean airport. Our luggage was handled going into airport & out…. no tipping necessary….yeah! Nothing to worry about. The uniforms (royal blue/purple and red) of all Latam employees are so very attractive.

Taucca first place we heading to…. where we visit a school.

Hotel is at 9,500’…Sonesta Del Inka Yucay… such a gorgeous location surrounded by mountains. The rooms were very nice although not as lovely as the last place.

Agriculture is first economic income of this area, then tourism.

Rainy season they get 155” rain from December through April.

Houses everywhere (particularly in Cuzco) on side of very steep hills… no roads… only able to get to by walking …. 2-4 times a day. Makes for being in good shape. Have to get water from springs by walking and carrying. Homes made of mud and adobe or now ….concrete.

On top of homes…Cross…. indicates they are catholic and 2 bulls-prosperity

Cuzco…… built on side of hills 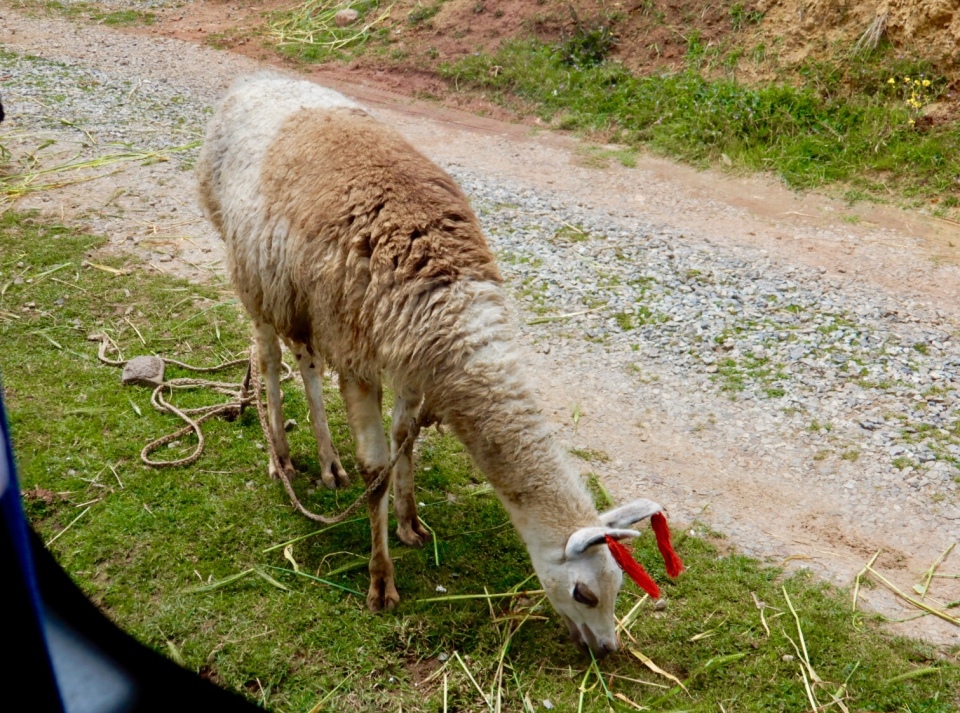 Llama (yyama)…. along the road 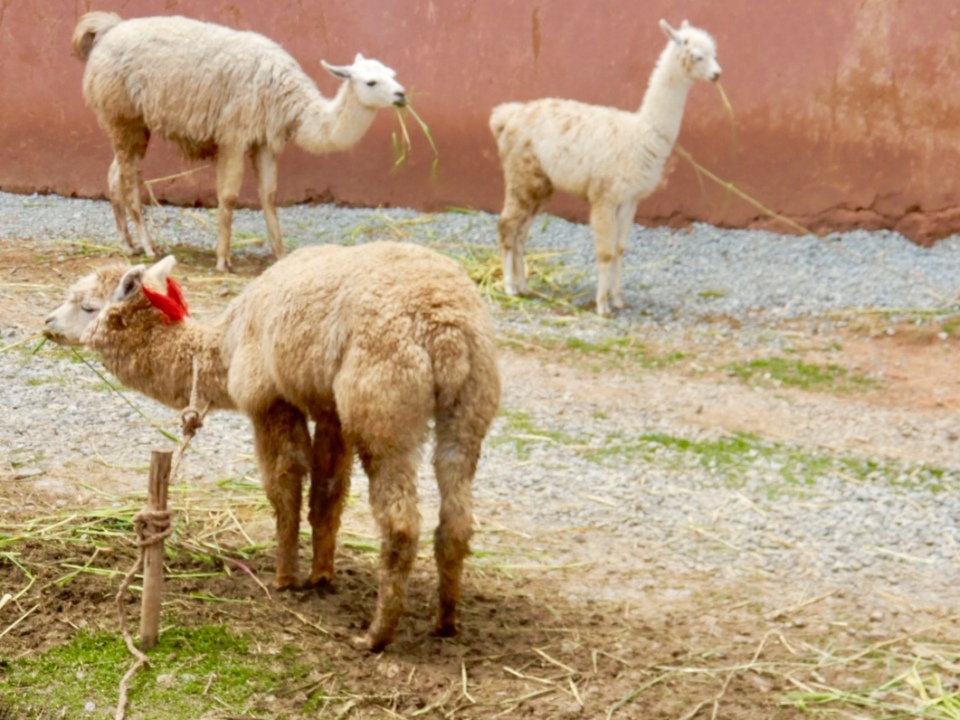 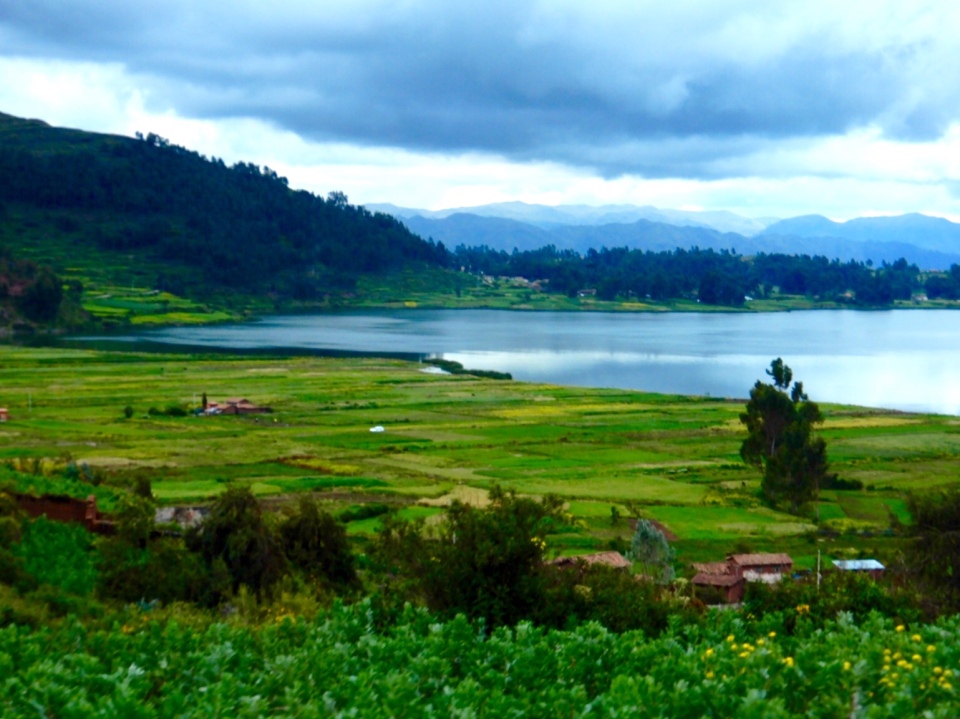 The lake that is the reservoir for all of Lima

At stop for washroom and snacks the altitude is 11,500’ and I’m feeling it… no energy, a weight on my chest and shortness of breath. They are growing fava beans and lupins which they boil the seeds 3 times. It’s called tarwi … very high in protein. Incas developed 3000 varieties of potatoes & 300 varieties of corn.

Alpacas short nose, short neck and ears, tail down, more wooly, more protein no fat, good for eating. llama (said yama) are used as pack animals (but not more than 40 lbs), not for meat, has long ears long nose and neck.

Lake used for reservoir for all Cuzco city water.

We stopped into see the school that Gate 1 supports in Taucca. Gate one has foundation that is funded by our purchase of trip for the school. When we arrived the kids were there, took each of our hands and walked us in….. a bit too fast for most of us. They are used the the altitude. It wasn’t long before the youngest traveler, a man 30 years of age, passed out cold. The kids sang a song for us, then another in Quechuan language wishing one of our travelers a happy birthday. Then they ending with all the 25 kids hugging him… so sweet! Noella (said Noeyya) is the girl in picture with me —6 years old. 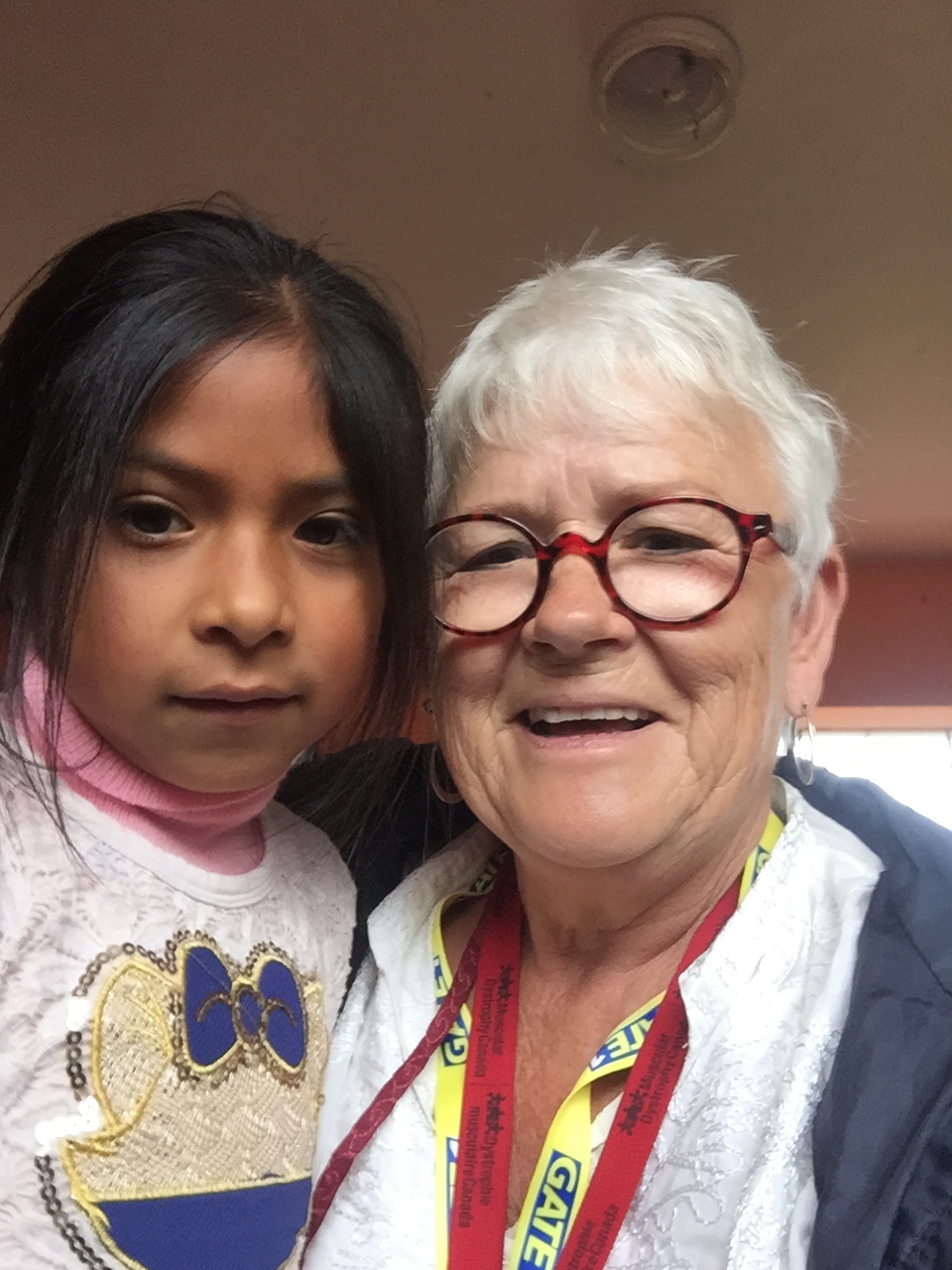 Norella (Noreyya) and me at the school 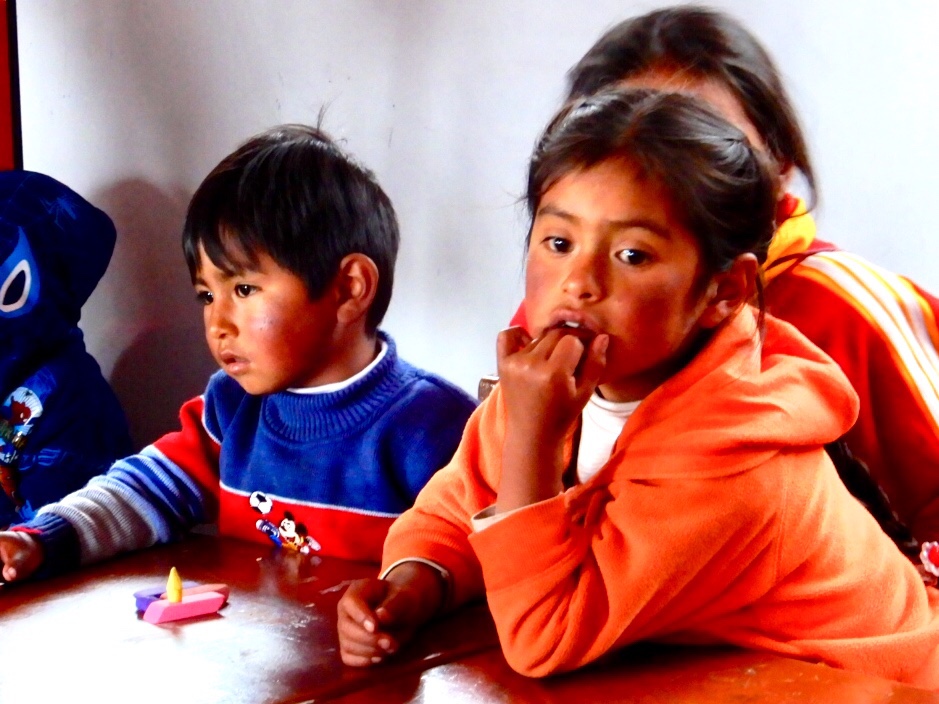 More of the kids 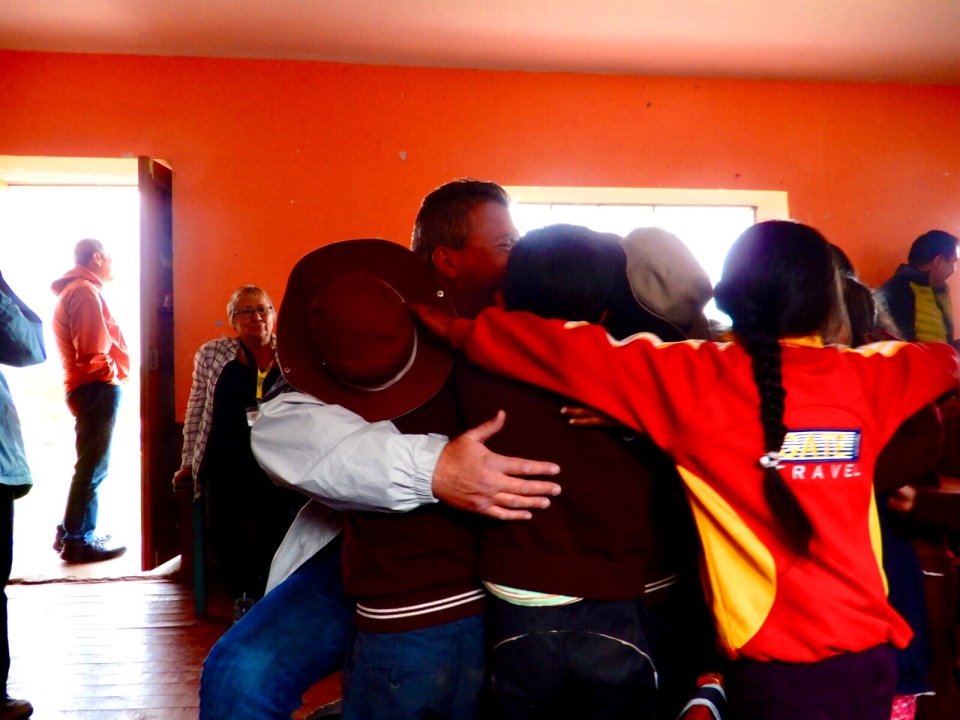 Birthday hugs for David.. at the school

This adorable little girl previously was waving and smiling so much but I unfortunately missed it.

At 13,000 feet we go to restaurant in Sisichakuna. We were greeted by villagers dancing and singer. The outfits they were wearing are their usual daily garb. We were treated to Chuta wheat bread, Quinoa soup, a green paste made from cilantro and yellow peppers…. very good but spicey hot, guinea pig, purple potatoes, chicken, giant kernel corn and tortillas made from corn but not at all like ours at home. It was pretty much really good. I could not finish my lunch cuz I became very unwell & required oxygen. Katherine required oxygen as well. Not in our wildest dreams did we expect to be affected.

Roger and one of the ladies at the restaurant with ever present llamas. 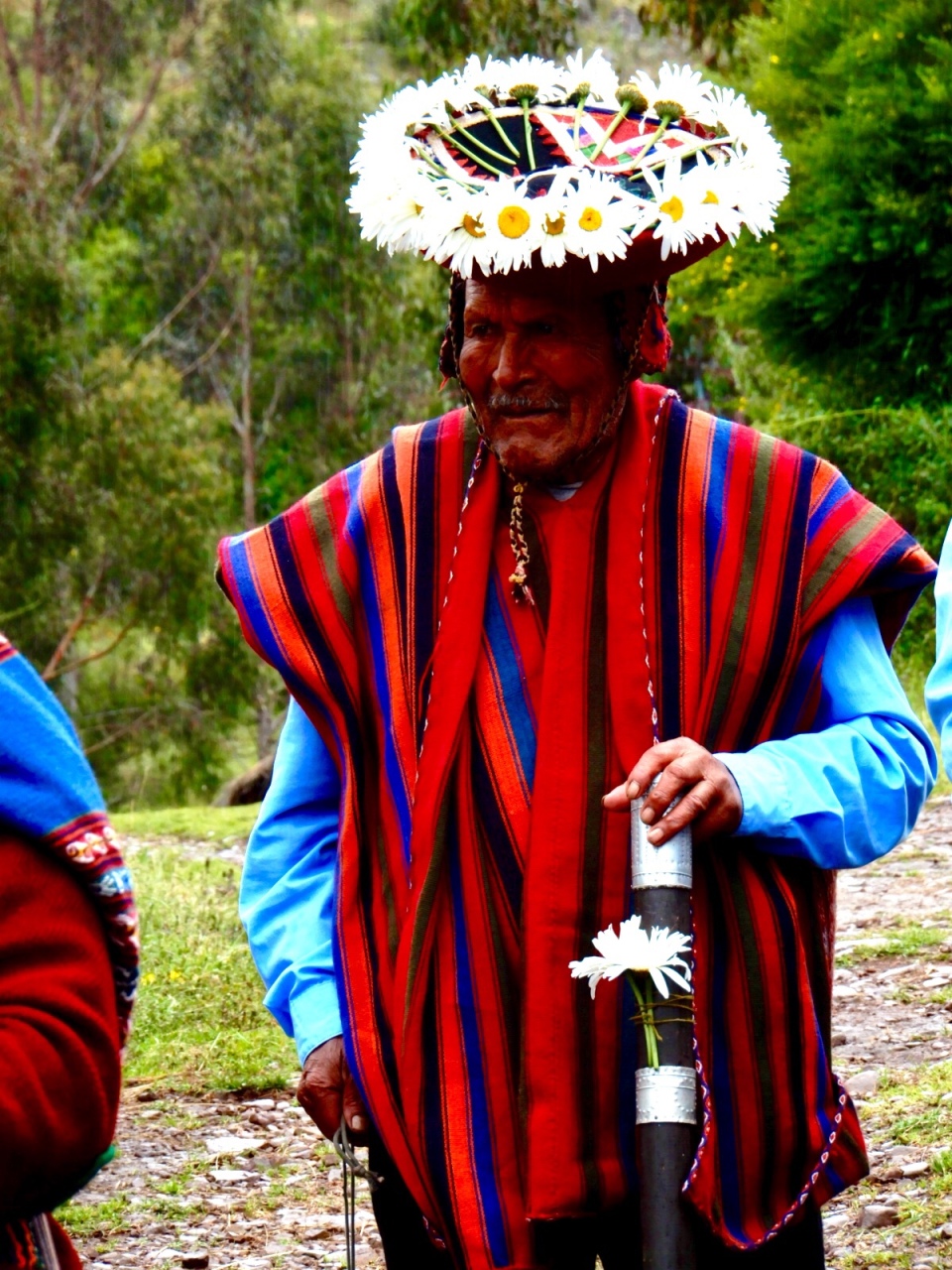 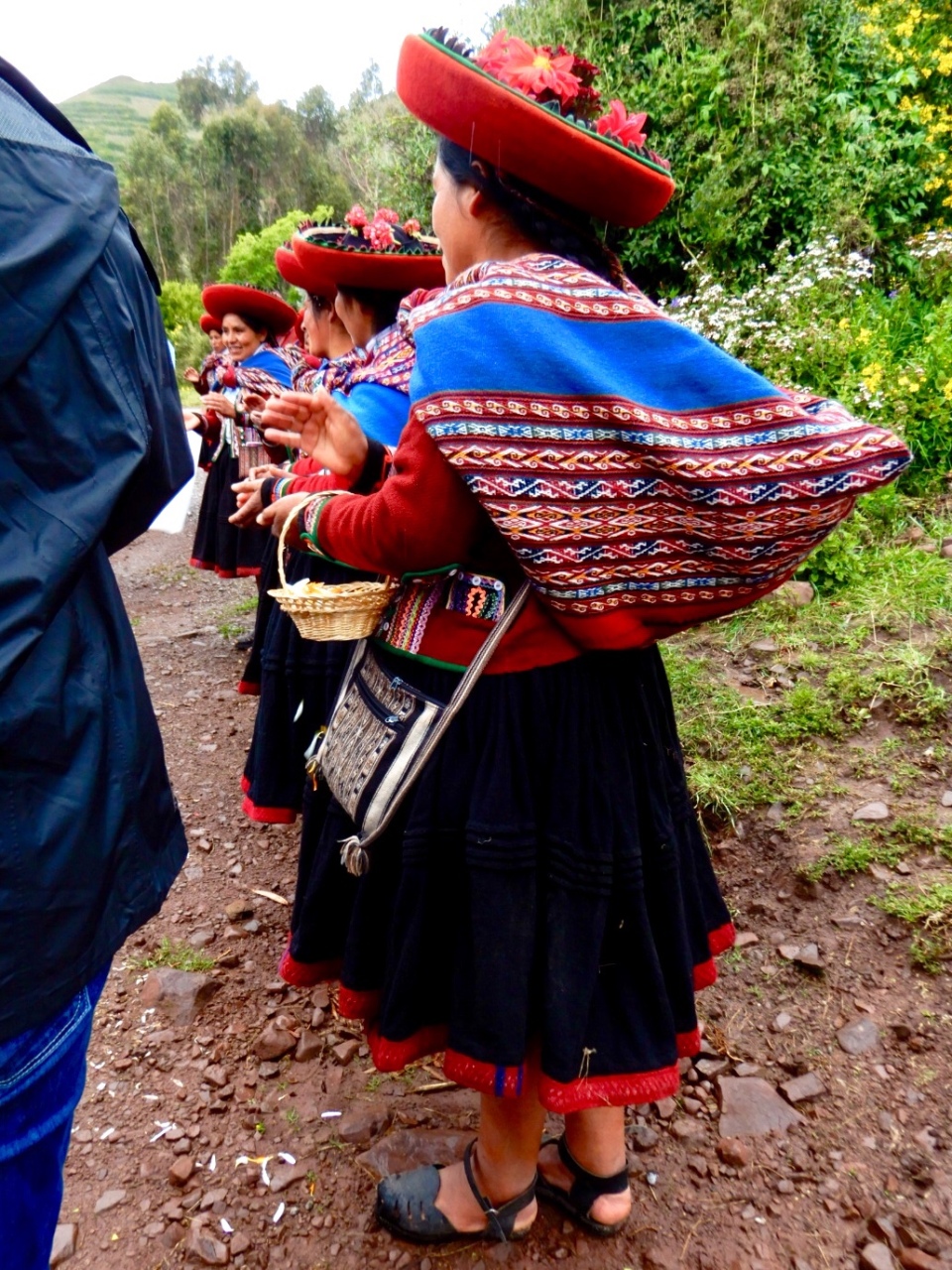 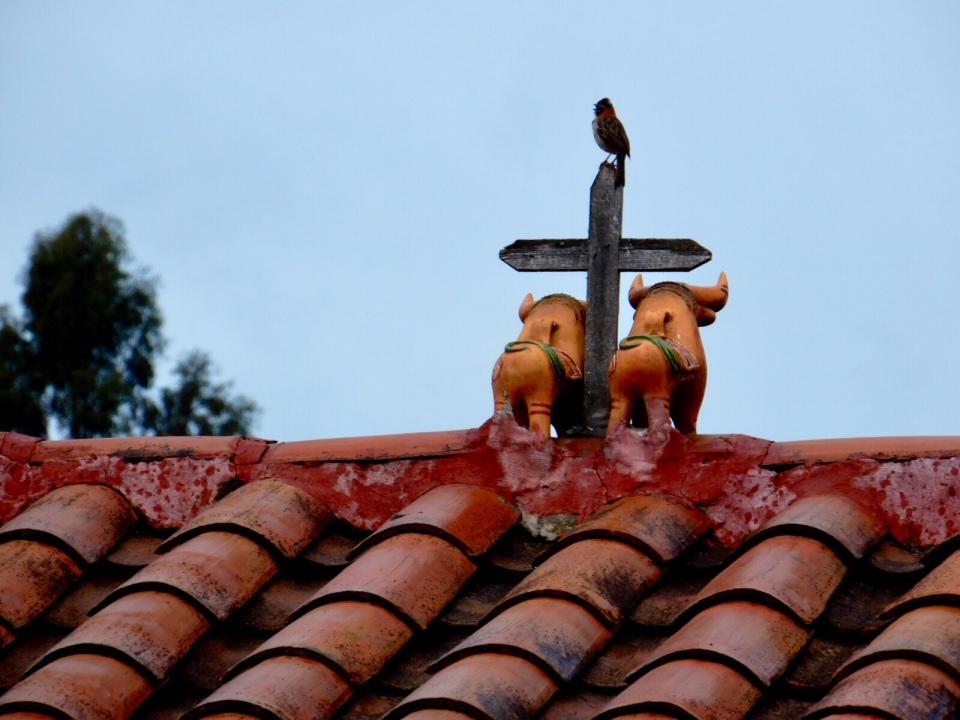